A compiler must be installed on any machine used to prepare Prophet runs. Prophet allows you to use one of the Microsoft C++ compilers.

We support only the Express, Professional and Enterprise versions of Microsoft Compilers.

Compilers can be acquired through normal commercial licensing on https://visualstudio.microsoft.com/vs/older-downloads/. Clients are required to ensure compliance with the licence terms of any compiler used, and the responsibility for this remains solely with the client.

To install Build Tools for Microsoft Visual Studio 2017 download the installer (link https://aka.ms/vs/15/release/vs_buildtools.exe).  Run the installer and select "Visual C++ build tools" when the option appears.  Click on the image below for a clearer picture. 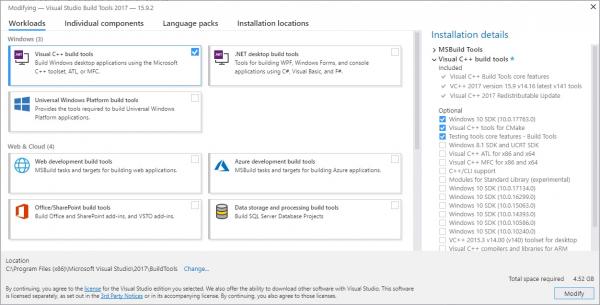 Note: Visual Studio 2017 Express Edition requires product registration with Microsoft. Each user needs to create a Microsoft account and activate their product against their account. This is part of the terms of use of the product.

"Express 2017 for Windows Desktop" can be found on this page https://visualstudio.microsoft.com/vs/express/

To install Build Tools for Microsoft Visual Studio 2019 download the installer (link https://aka.ms/vs/16/release/vs_buildtools.exe).  Run the installer and select "Desktop development with C++" when the option appears then deselect "C++ AddressSanitizer" on the right hand side.  Click on the image below for a clearer picture. 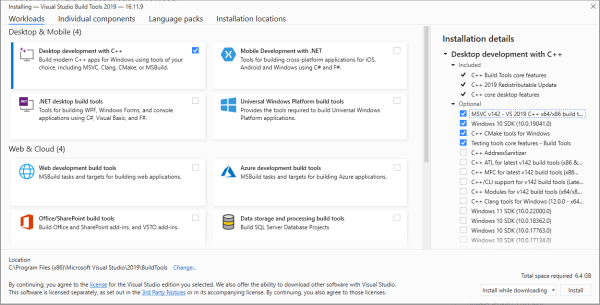 Additional installations of the Windows 10 SDK

Ensure that the most recent installed version of the Windows 10 SDK is no later than the version installed with Visual Studio 2015, 2017 or 2019.

If you have any questions about compilers for Prophet, please contact your regional representative or the Prophet Helpdesk. All contact details can be found here.